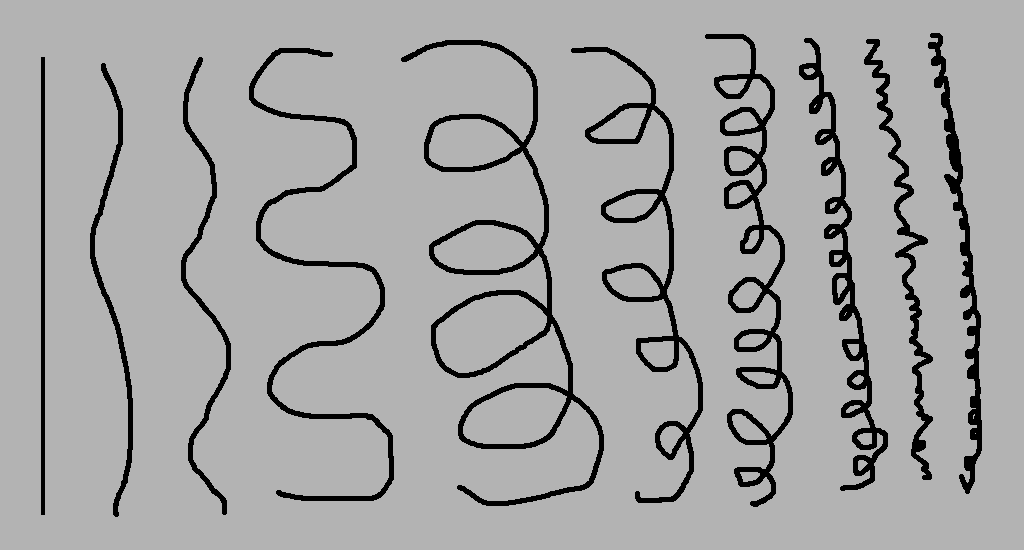 First on the list of things you didn’t know was “a thing” before diving into the curly world- hair typing. Turns out there’s more than just basic denomination of “curly or straight.” I’m sure at this point everyone has seen pictures like my terrible drawing that I did in “paint” pictured above. These are curl types.

Before we start, I just want to remind you that it’s COMPLETELY normal to have multiple curl patterns on your head (as well as density, texture, and porosity.) Rarely do people have uniform curls naturally. My under layers by the nape of my neck are barely wavy and I have some barrel curls near the front of my face.

Basic hair types are straight, wavy, curly, and kinky-coily (the 4th has a few different variations on the name, but usually something similar- kinky-curls, kinky/coiled, etc.) One thing you’ll see is these types being put into a number-letter classification system. Not everyone follows this form of typing, but it’s good to have a ballpark idea of what it means if you’re going to be following curly Instagrammers, YouTubers, or even reading curly forums. Type 1 is straight, so doesn’t follow the letter guide. Wavy is 2, curly is 3, kinky-coily is 4 with the letters indicating the circumference of the curl. One of the reasons people opt to ignore the lettering system is because it doesn’t seem to be consistent. The same curl can be categorized as different type depending on what chart/resource you’re looking at.

Straight hair is naturally strong because of the way the hair is bonded. Signs of hair being truly straight are being resistant to curl (curling iron curls fall out easily) and minimal frizz. As the OG Lorraine Massey says, “Frizz is a curl waiting to happen.” The only reason someone with truly straight hair will have frizz is because of new growth or breakage from tight hair ties, etc.

I’m mostly this category. Lots of people in this category don’t realize their hair is curly because it’s easy to brush out and just have a frizzy poof that doesn’t look like waves or curls. 2A is mostly straight with some bends, and benefits most from lightweight stylers. 2B has a tendency to be straighter at the roots still, but gets more of a defined s-shape past the ears. 2C is the tightest wave that borders on curly, and these people probably have a few barrel curls mixed in (like me!)

My face framing pieces often fall under the 3A type. This category tends to be more the “curling iron” family of curl. Barrels shapes with 3A being the biggest barrel and 3C being the tightest. And in the confusion I’ve sometimes seen 3B compared to a sharpie width and sometimes 3C described that way. So…we’ll just go with 3B and 3C are writing implement sized, anywhere from pencil through sharpie? Something like that? This pattern is more likely to start the pattern at the root than its wavy counterparts.

Tightest of the curl patterns. Generally curls in this range are very tightly curled, in shapes ranging from s-shaped curls through zig-zags. I’d love to give you specifics on what these types look like, but depending on the source it seems to be even more varied than 2s and 3s, so I’ll just say 4A is usually a tight, distinct curl pattern. 4B and 4C curls also have their own patterns, but for those with thicker hair it can be hard notice a distinct curl pattern due to lack of space between the strands/clumps. While some people in this category covet the definition of other patterns, others would do anything for their natural volume.

Do you have a favorite way of categorizing curls? Do you love the categories? Hate them?